This section describes the internal design of Cyanite and the different components which it builds upon.

Cyanite’s internal architecture is that of the typical stream processing project, it connect inputs to outputs while doing normalization and mangling.

The internal architecture can be represented with this simple diagram: 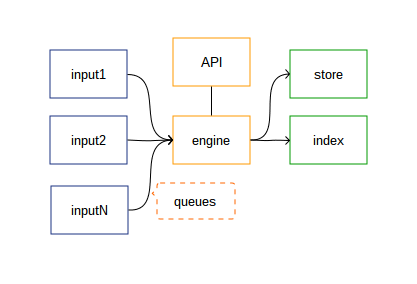 As is described on the diagram the workflow is:

Input components are arbitrary means of inputting metrics. Out of the box there are three available types of input components, such as carbon: a TCP listener for the text protocol known as Carbon, which is part of the Graphite tool-suite.

The other inputs, such as Kafka, Pickle are planned but not yet supported by Cyanite.

Input components are responsible for producing metrics in a normalized way:

Once a metric has been normalized, it is handed over to the engine component through its accept! function:

The engine component is responsible for popping metrics off of its input queue, aggregating data over a time-window and producing write operations on the index and store components when necessary.

To do this it holds on available points for a while and flushing them out when necessary.

The fact that Cyanite holds on to metrics in memory makes it a stateful server. As such if you wish to use Cyanite in a redundant fashion, you will need to account for it. See the Administrator Guide for details on how to deal with this.

The aggregation mechanism for metrics relies on a fast in-memory hash-table. Each metric is kept on a bucket corresponding to the metric path and its resolution. When a time-window has passed for a metric sums, means, minimas and maximas are computed and emitted as a /snapshot/.

Cyanite supports several resolutions based on a first-match set of rules as provided in the configuration file. Rules are a list of patterns to match a metric name on corresponding to a list of resolutions (in the form <precision>:<period>).

Snapshots are then handed over to the store and index components. The process can be represented visually like this: 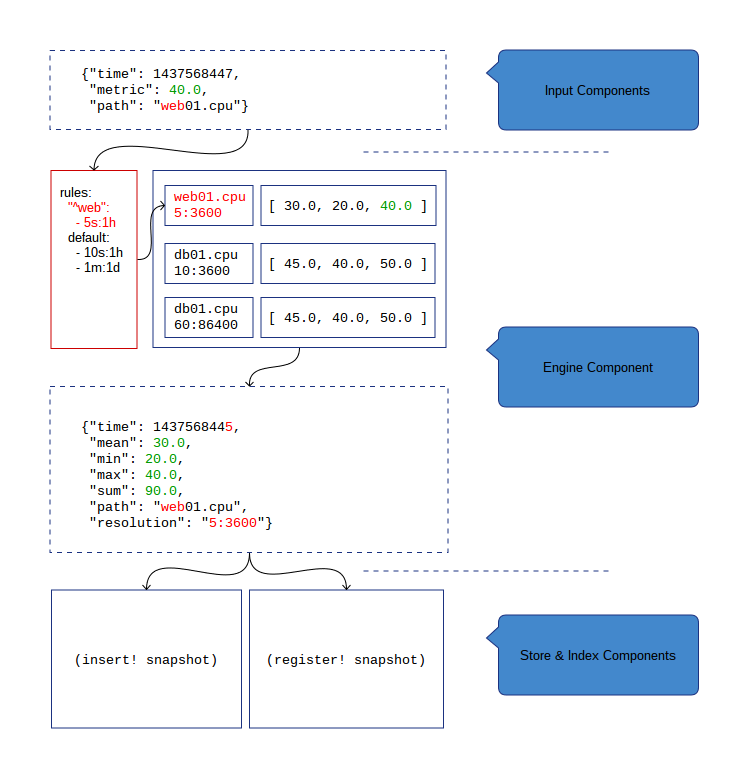 Cyanite accounts for drift by comparing its wall clock to the values provided in metrics. Once a resolution’s time-slot passes over including when accounting for drift, values are flushed and a snapshot is created. This means that out-of-order values may be supplied but not once a time-slot has already been flushed.

The store component is called for each snapshot created by the engine component. The only working component stores data to Apache Cassandra.

The following schema is used to store data:

This schema leverages Cassandra’s Compact Storage option to ensure a minimal overhead. Please be sure to choose the optimal compaction strategy for your use case. If available the DateTieredCompactionStrategy is likely your best bet.

The index component is responsible for building an index of path names and providing a way of querying them back. There are two implementations of this component available:

The memory index is a poor choice for redundant setups since it will only know of metrics passing through it. Additionally, it is only valid to use it when metric name cardinality is limited and metrics are recurrent since it will lose all its index upon restarts.

Any other request will yield a 404 response.